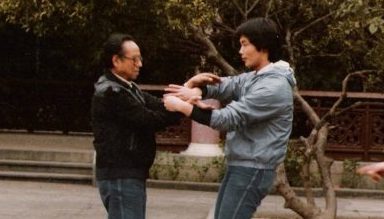 Having been studying Wing Chun with Sifu Wong and meeting Grandmaster Sum Nung, I am here to write about some of my experiences and understanding about Yuen Kay San Wing Chun. I was introduced to Sifu Wong by Dr. White who had been studying Wing Chun for many years under many famous grandmasters throughout the U.S. Dr. White highly praised Sifu Wong and strongly recommended that I meet him while I was attending a Thai kick boxing school. Out of curiosity I signed up to study with Sifu Wong's Wing Chun class. Dr. White told me how superb Sifu Wong's martial art skills were. His lightning fast and crushing kicks was the best I had ever seen. Sifu Wong has a vast and in-depth knowledge of different martial arts including some of which are amazing and rarely seen, including, Chi Kung (internal exercise, for healing and health), and herbal medicines. I believed a master who came from China would give me a different perspective in martial arts - more in-depth knowledge, that was not distorted, exaggerated and commercialized. I happened to make the right decision.

Sifu is very selective in choosing his in-door students. Everyone has to go through a period of different tests by Sifu, including tests for patience, sincerity, self-discipline, and dedication, etc. He treasures his hard earned knowledge and share only with a few who feel the same way he does. As I studied, I witnessed many outstanding students who came from different schools and backgrounds. Most of them improved their Wing Chun skills from choppy and static movements to more fluid and dynamic ones. I found out that once these students understood the principles of Wing Chun, they had less difficulty in learning the application of techniques and their overall skills improved.

For example, David Kerr, a former USC football player, who was very motivated, open minded and physically talented, within 2 months after studying with Sifu Wong impressed me with his improved skill just like day and night. He was able to defeat his former kick boxing instructor. I am most impressed with his now improved kicking and sparring ability. Within six months of training with Sifu Wong, he was able to attract close to 100 students.

I have read a lot of martial arts books and Bruce Lee's books and watched many instructional and martial arts movies and tapes. Sifu Wong is the one who has guided and taught me in-depth about Wing Chun and other martial arts in general and has given me incredible insights on Chi Kung. He taught me things that I would never have learned from a book or tape. I witnessed his power and skill in combat, healing others and himself.

I met my Sigung (teacher's teacher) grandmaster Sum Nung in 1995 during his visit here in the U.S. I was very excited because he is a living legend of Wing Chun kung fu. He was very charismatic and when I was crossing hands with him, I could feel his hands fill with incredible sticking energy at close to 90 years of age. He was getting me out of balance while he had just drunk a bottle of "Jack Daniels." I was not drinking. He later gave me some great advice on Wing Chun techniques. I was able to see the skills and knowledge of this great master that has been passed down to Sifu Wong whose skills resemble Sigung, a true martial artist. I feel very fortunate to be Sifu Wong's student. Grandmaster Sum Nung is a humble and an incredible human being and so is his student, my teacher, Sifu Wong. Throughout my life and acting career I have seen many martial artists. I honestly know that grandmaster Sum Nung and Sifu Wong are two of a kind with really remarkable Wing Chun expertise. After meeting Sum Nung and listening to his inside history on Wing Chun, I gained a better understanding of various branches of Wing Chun an how they are different. I could see why people collect many styles of kung fu or Wing Chun techniques without fully understanding the principles and get mixed information.. Sifu always says that perfect practice makes perfect. Many people feel that all Wing Chun styles are similar. That is true to some extent. I have heard sayings and read articles about karate that looks like Wing Chun too. People have rights to their own opinion. I felt the same way in the beginning, but after studying with Sifu for a while I realized that many instructors make up things they don't know or are without enough information. Many learned from their instructors who made up stories but never could tell the differences. many of these misinformed go way back to many generations. Some are modern founders of their own styles without any in-depth knowledge. That's okay. I am not here to criticize anyone, for it is not my intention. I am merely expressing my true feelings, but I feel very fortunate to have met and studied the amazing Wing Chun kung fu under the extraordinary Sifu Thomas Wong, thanks to Dr. White's recommendation.